Jewel members made a trip to Orang Asli Village at Kampong Tamok, Bekok, Segamat District, Johor.We were greeted by Mr. Machang, the respected leader in the village.

Jewel assisted and made the arrangement for a Volunteer from Switzerland, Ms. Ann Richter to assist and advise the Orang Asli especially the ladies in creating activities for  eco- tourism  to improve the economic status of the community.

They are bunch of amazing and talented people.

Jewel is working on  empowering  the ladies in the village to be independent and help to create income from economic activities like basket weaving, demonstration of Orang Asli cooking  and  many uses of jungle products  collected in their  ‘backyard’. 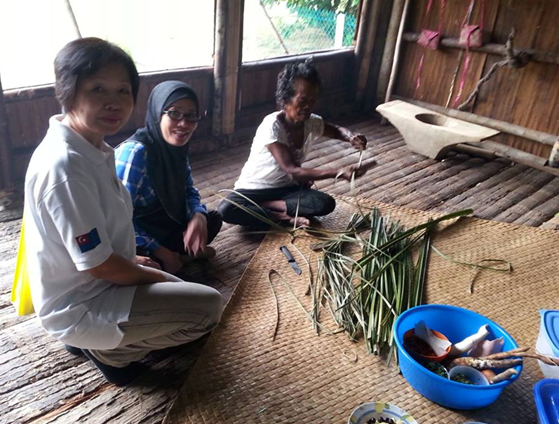 Demonstrating how the palm leaves  are prepared for the basket and mat weaving. The Rumah Kebudayaan has now been readied to showcase the various Orang Asli cultural exhibits and  demonstrations like weaving, using a blowpipe, cooking and dances for tourists 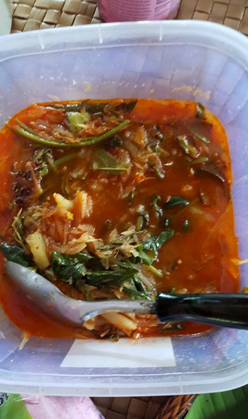 A delicious  vegetable- only dish of  scraped  tapioca , tapioca  leaves,  daun    kesum and chillies among the varied  ingredients.

Vanitha , Jewel’s Head of Women Empowerment sub-committee is seen here at the lawyer’s office helping to file the papers for  child custody  for the client, a victim of domestic violence  abandoned by her husband. Jewel gives assistance to DV victims who have no financial means by paying for the cost of opening a file with the lawyer who will assist in advising  the victim and  bringing the case to court. A month’s work in filling in the forms and getting the necessary documents ready to fight for custody of the children! 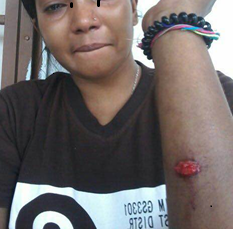 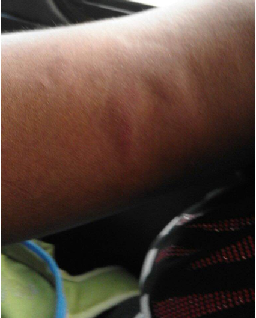 iii.   S,  aged : 42  . Single mother with 4 school going children. Jewel assisted with back to school purchases 2015. She  could not read or write, proudly received her driving license with the help of Jewel organisation paid for her driving test and assisted her in getting the necessary documents to take the verbal test. She will now be able to earn a living driving children and factory workers in her car. 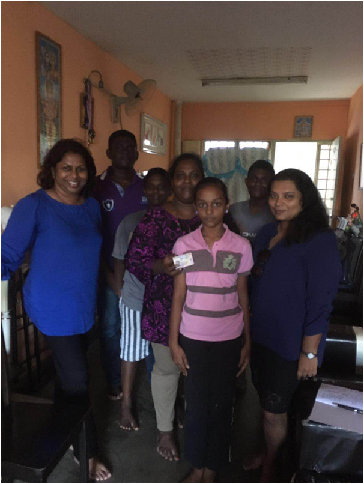 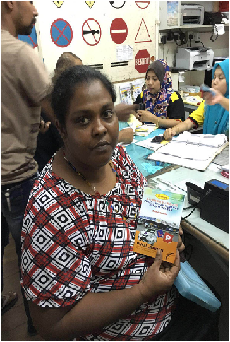 iii.  S , DV victim. Vanitha , head of W.E.  fetched from HSA. Her husband hit her and poured petrol on her and  attempted to light her up. Also threatened with a knife.  She was taken to Jabatan Kebajikan Masyarakat  for IPO. Then taken to Mahkamah Seksyen. Abuser has been sentenced to a year of jail. Ongoing Counselling & job placement 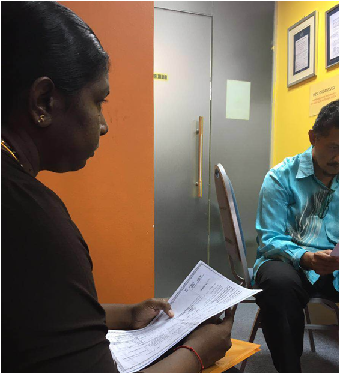 Shariffah  who was severely beaten up by her abusive husband who traumatised her and the children has started her baking business with the assistance and support  of  Thanam  and Jewel  from the time she was a victim of abuse . With her husband jailed over the atrocities he committed, she is able to start a new life and today she celebrated the launching of her food business which was  jumps
tarted by a donation of  baking  equipment  from Jewel. 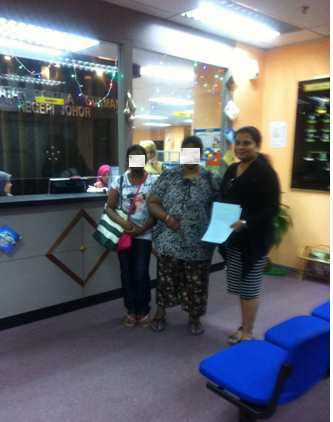 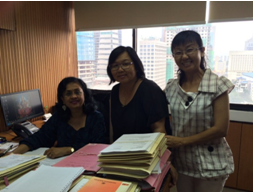 Jewel’s  efforts to  empower  Johor women to be leaders  in joining   women all over the world to urge  for world peace through a mother’s heart .  The Peace Forum, jointly organised by Johor Women Development Department (JPW) , Johor Bahru City Council (MBJB) , International Women’s Peace Group ( IWPG) , Jewel and other women NGOs  brought together leaders of NGOs, prominent members of society  to promote the culture of peace in Johor. 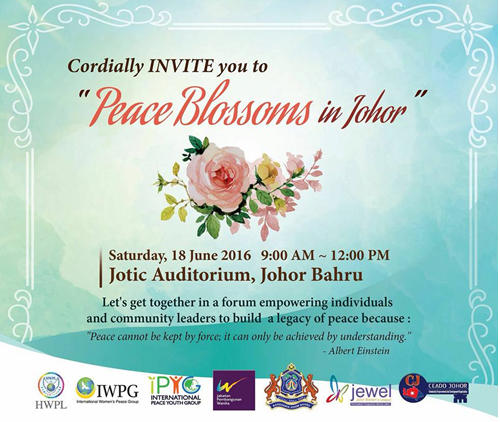 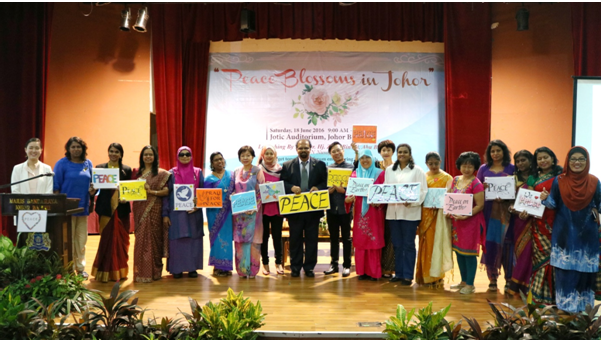 The Johor HWPL Peace Advocacy Committee members  at their Inauguration on 18 June 2016. 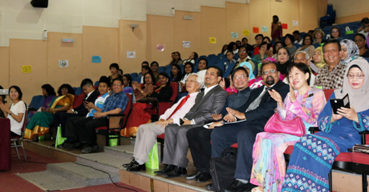 One of Malaysia’s iconic female leaders, Tan Sri Rafidah Aziz was in town to inspire women with her wisdom and experience. Jewel invited the  Former International Trade and Industry Minister and now Chairman of AirAsia X to mark International Women’s Day 2016 with a public talk titled “ Plant 50-50 by 2030: Step It Up For Gender Equality”

Tan Sri Rafidah pointed out the simple fact that women must take charge of their families, a simple leadership role within one’s immediate circle of people that can help shape the future. 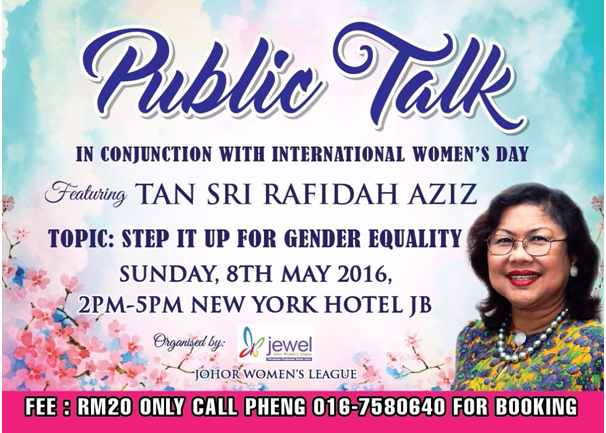 In line with Jewel’s objective of empowering women, the outgoing and incoming Jewel Presidents highlighted  the 2016  UN theme  “ Planet 50-50 by 2030: Step It Up For Gender Equality”  preceded with  a multimedia video on Jewel’s projects.

It was a very meaningful and colorful event as  it was graced by HRH Raja Zarith Sofia Binti Almarhum Sultan Idris Shah, The Queen of Johor.

Empowering the Voice of Women